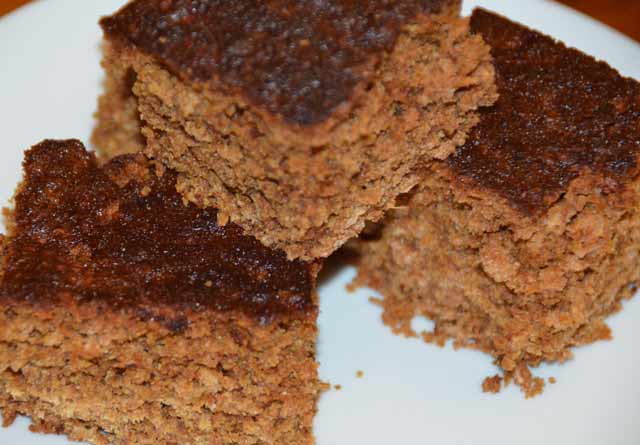 When I asked my husband what cake he would like me to bake and he replied Parkin. He used to have Parkin quite often as a child and so had fond memories of it. I have only had parkin occasionally and was never clear exactly what it was so I thought it was time to for some investigation.

Of course the answers to these sorts of questions are never as straightforward as you might think – since the exact origins of the cake or the name are unknown, and there is no definitive recipe.

A traditional ginger cake with a sweet stickiness, it can be served with tea or warmed up as a pudding served with custard

It is basically a ginger cake made from oats and treacle but recipes vary from using oatmeal and black treacle, to using oats and golden syrup. The textures vary depending on the recipe but basically you have a spicy, sticky cake that can be eaten cold as it is, and is popular for bonfire night – or can be eaten as a pudding, warm with custard. It is certainly a warming cake – ideal for the winter months.

Traditionally parkin is left to mature for a few days but you may find it won’t last that long!

I have used golden syrup only in this recipe but you can try it with half golden syrup and half black treacle for a less sweet, deeper flavour.

I think traditionally Parkin is served in squares – so if you do have a square tin – use that. The size will be approximately 23cm x 18cm.