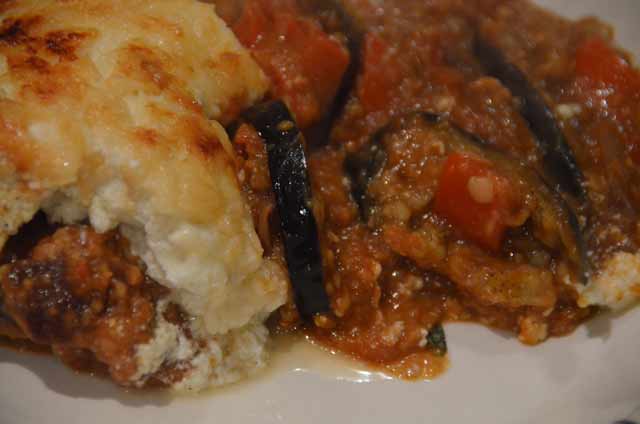 Moussaka is generally thought of as a Greek dish although there are Turkish versions. It is traditionally made with meat, usually minced lamb. This vegetarian version of moussaka does not purport to be particularly authentic, especially as it is vegetarian but is a tasty dish, loosely based on the idea of moussaka which is made from aubergines, tomatoes and with a cheesy sauce topping. But I use lentils to replace the meat.

Moussaka has become a popular and standard dish in restaurants and in the home, and I imagine that is partly beacuse it is easy and low cost but at the same time something a little different. It make a very good change from other standard recipes such as Shepherds Pie or Spaghetti Bolognese. It makes a lovely supper whether for the family or it is also perfect as an informal meal with friends

It still has the lovely spicy warmth of cinnamon and nutmeg and the robust unusualness of the aubergines – a vegetable I have grown to like but still find a little bizzare.

Aubergines were orginally grown in India although now is grown in many countries. They were introduced to Europe in the 1500s. They became incorporated into Italian cooking long before they gained any popularity in England. They didn’t really become popular in the UK until after the 1960s.

I remember when I first learned to cook aubergines, that you cover it in salt and leave it for a while before cooking it. This was to reduce the bitterness and it also has the effect of reducing the amount of fat it will absorb. Many varieties grow now don’t have the bitterness so it is less necessary to do the salting and I didn’t pre salt the aubergines for this dish.

Aubergines are readily available in supermarkets and cost around £1 each. One large aubergine is sufficient for this recipe – but it is up to you whether you would like more or less in your moussaka

Serve with salad or some green vegetables. 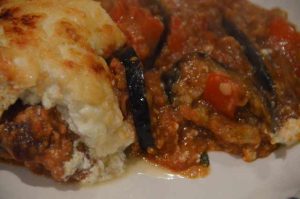