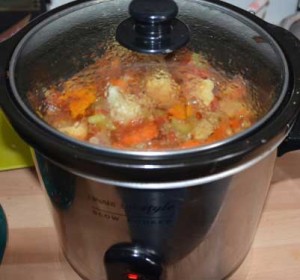 I am always delighted when a reader sends in a recipe and this delightful corned beef recipe is no exception. I must admit it is a long time since I tried corned beef and then had it mainly in sandwiches rather than as an ingredient for a cooked meal. Tinned corned beef does make for an economical meal costing around £2 for a 340g can. I would certainly be interested in further corned beef recipe ideas from readers.

The recipe mentions Vegemite as an ingredient. I think it is quite easy to get in the UK now but Marmite or even Worcester sauce might be a good substitute.

I would like to share my mother’s corned beef recipe. I don’t know why it is called Irish stew as there is no lamb in it and it is more of a soup than a stew. However, it is one of the easiest and cheapest dishes to make and nice to eat. You just throw everything into a pot!

Some ingredients do not have any quantities, I just estimate according to the number of people. This recipe also uses Vegemite – very popular here in Australia but I’m sure there is a substitute in the UK.

What Is Corned Beef?

A quick look around the internet reveals what corned beef actually is made from. There are far more detailed histories if you want to know more. It is really quite a simple product being a type of salted beef which is a preserving technique dating back centuries. The term corned comes from the kernels of salt that were laid on the meat in order to preserve it. At one time Ireland was the biggest exporter of Corned beef – hence why this recipe is probably called Irish Stew! The cut of beef used is usually brisket.

A tin of corned beef has surprisingly few ingredients. I must admit I expected it to be a far more processed product with lots of additives. If you cook with corned beef, do please send in your recipes