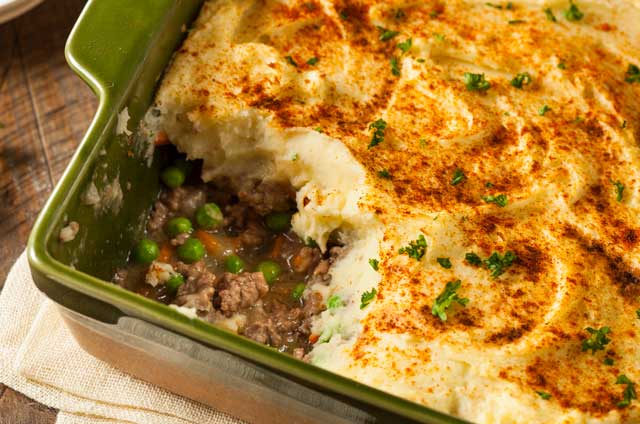 Shepherd’s pie is such a tasty, filling and warming dish that I just had to include it in my recipes. This recipe covers Shepherds Pie – made with lamb mince – and Cottage Pie – made with beef mince.

The mince could be raw or it may be the leftovers from a roast dinner.

Shepherd’s Pie is a traditional recipe that you can adapt to your own tastes. Add lots of vegetables and beans, if you wish, to reduce the amount of meat you use

The concept of the cottage pie has been with us for well over a hundred years and possibly dates back to the beginnings of the potato being more popular in the 18th century. Introduced to this country in the late 1500s, potatoes were at first seen only suitable for the wealthy. It only became a popular staple of the British in the 18th century.

By 1800 it was a staple in Ireland with the result that when the crop became blighted it caused starvation and death in the Irish Potato Famines of 1845 Before that potatoes, along with other vegetables, were rather viewed with suspicion and some considered them to be harmful.

The potato originated in South America and has been cultivated there for several thousand years. It was the Spanish who brought them to the rest of Europe from the Incas of Peru in the early 1500s

Potatoes have most of the main vitamins and are especially high in vitamin C. They are also a good source of fibre. Being filling and tasty they still make an excellent low cost meal, especially when cooked as Baked Potatoes. This basic Shepherd’s Pie recipe can be adapted in so many ways. Any leftover vegetables can be added to the meat as well as many fresh vegetables. Carrots are particularly good with the meat.

Of course if you have a vegetable loving family then you can have nice big chunks of vegetables in the meat, or served with the Shepherd’s Pie. Frozen peas or sweetcorn make a sweet and tasty addition. So ring the changes with your veg and with your seasoning

Worcester sauce adds some zing and plenty of herbs adds flavour. Also try a pinch or two of chilli if you like things a little spicy! A little cheddar cheese grated on the top gives it a cheesy, crispy topping.

Shepherd’s – or Cottage – pie is an excellent dish to make too much of for another day. Just place in a sealed container in the refrigerator for a couple of days. Or freeze it in portions ready for days when you don’t have time to cook.

This dish can stand alone without any vegetables, especially if it contains several. However it is really good with mashed swede (in my opinion!) and / or cauliflower. 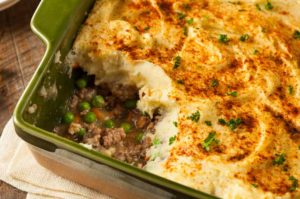