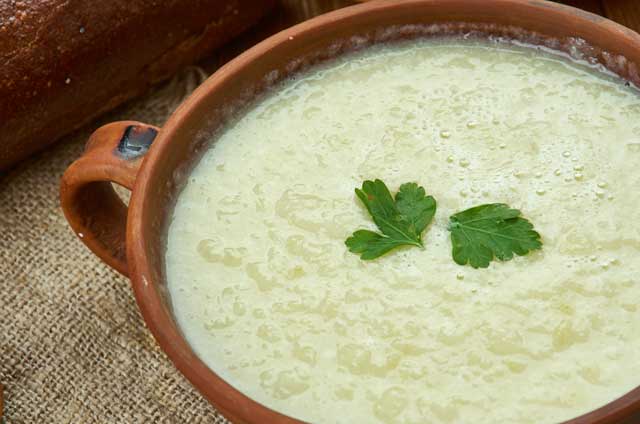 One of the joys of using a slow cooker is maximum taste for minimum effort! This leek and potato soup has a preparation time of just a few minutes chopping and then all the ingredients go in the pot for a long, slow cook.

The long cook means all the full flavour is extracted from the vegetables, which is why seasoning is best adjusted at the end of the cooking time.

I made this leek and potato soup in the slow cooker as someone requested a soup recipe for the slow cooker. Since I usually make soup for lunchtime, this will generally mean making the soup the day before and reheating – which is usually a good thing since the flavours are improved by being left for a day.

Preparing the Leek And Potato Soup

Leeks and potatoes just seem to go together, their flavours naturally complementing each other. Both are in season and where possible, do buy from a local supplier. Both are usually cheaper – and tastier – bought from a local greengrocer than in the supermarket.

As with most soups, I began with an onion. Some recipes recommend softening the onion in some oil before transferring to the pot. As I wanted to keep this recipe as simple as possible, I just put all the ingredients into the pot with some stock and a knob of butter. The result is very good once the seasoning was adjusted at the end of the cooking time.

All the vegetables should be cut up quite small as they do take time to cook in the slow cooker, especially on low. This soup was cooked for about 9 hours on ‘low’. It could be cooked on a ‘high’ setting for the first 2 hours. It is also important to remember not to be too tempted to lift the lid to stir and smell too often as it lets a lot of heat out of the pot which adds to the overall cooking time as the slow cooker will need to get itself back up to temperature.

Ensure that the lid is tightly on the pot, peeking to look and stir only once about half way through cooking and then leaving it until the end when you expect it to be ready

Of course another lovely side effect of using the slow cooker is the delightful cooking smells that waft through your kitchen all day, creating much anticipation for the dish that you are cooking.

It is best to preheat your slow cooker for about 20 minutes before adding the ingredients so that when you add the ingredients it can get the dish to the right temperature more quickly.

I used three large leeks for this dish, and two large potatoes. This seemed the right proportion and combination, but different recipes will give you different proportions. It will also depend on what you have available. Another vegetable can be added if you do not have quite enough, such as a carrot or cabbage. Soups are ever flexible in both their ingredients and their flavourings

I added some mixed herbs to the stock at the beginning but waited to adjust the salt and pepper seasoning at the end of the cooking time and also added a teaspoonful of paprika – a spice made from red bell pepper.

This soup can be served with swirl of single cream, or a sprinkling of cheese – mozzarella or cheddar – and of course a slice of crusty (home made) bread.

You will need a Slow Cooker