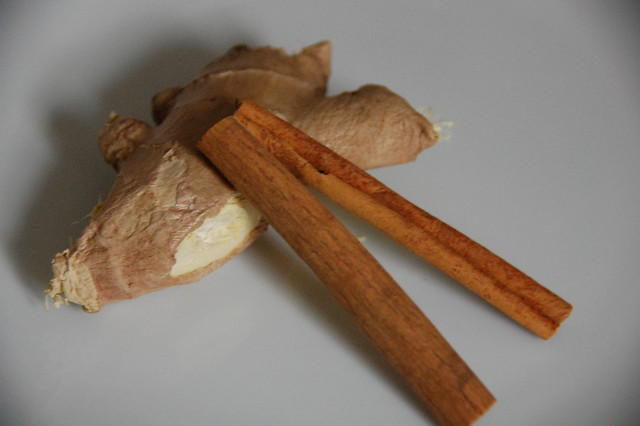 I was taught how to make this amazingly simple and gorgeous tasting ginger and cinnamon tea from eminent herbalist, Simon Mills. He had taken time out of a busy day to pass on a very welcome piece of his knowledge.

Learning to make ginger and cinnamon tea is a great blessing for cold days, warming and spicy it is great when fighting off a cold

He told us that this is a tea that was great for warming you up on the inside when you had got cold, especially in those times when you just can’ get warm. It is also good when you have a cold or are feeling a bit chesty. To be honest it is also great when you just desire a warming and delicious drink. The recipe was especially welcome to the several people there who were suffering from the aftermath of colds and flu.

The tea is very easy to make and the recipe below can be treated as just a guide as some people will like it more ‘gingery’ than others. With a bit of trial and error you will get to know just how you like it. The recipe suggests fresh root ginger and cinnamon bark although you can use ground ginger instead of fresh root ginger – and ground cinnamon rather than cinnamon bark. Its just for the freshest flavour and best results these are the best. Root ginger is very easy to grate – so I would recommend using that as the result is a much better flavour – and I am sure fresh ginger must be better for you.

Interestingly Simon told us that wild ginger became extinct 2000 years ago because it had been used so much for medicinal purposes. The ginger we have now is cultivated, not wild.

The Joy Of Freshly Made Ginger Drink

Because this drink is so delicious and warming, I am sometimes quite flummexed as to how these older remedies have died out so easily. We seem to prefer instant drinks that have been processed, things measurable in a teaspoon and that have promises on the packet. Perhaps if a piece of root ginger was packaged with some cinnamon and sold with a recipe than it would become more popular that way. What do you think?

If you have never bought root ginger before, it is available from supermarkets in the fruit and vegetable section. Cinnamon sticks can be bought from the herb and spice section. Buy the one with the longest ‘Best Before’ date to ensure it is the freshest you can get. Alternatively get some cinnamon powder.

Do you have any great recipes for herbal teas? Do share them, if you have.