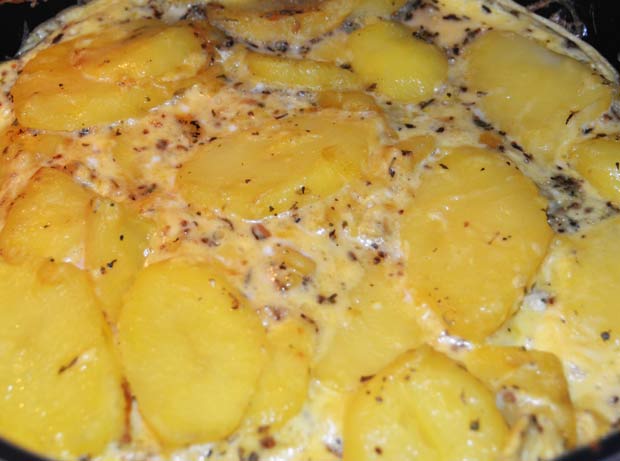 A Spanish omelette is really so much more than, well, an omelette. It is often referred to as a Spanish Tortilla and is thicker and more substantial than a folded french omelette. The main filling is potatoes. It takes about 20 minutes to make so still qualifies as a quick and easy recipe. Low cost too!

A Spanish Omelette is a very easy and tasty supper, made form basic but delicious ingredients to which you can always add your own flourish

Spanish Omelette is part of Spain’s traditional cuisine and just has to be tried on a visit to Spain.

An egg based recipe deserves to be made with the tastiest eggs. These are usually local free range farm eggs bought direct or from local greengrocers or farmers markets. They are often cheaper there than at the supermarket too – certainly less cost than supermarket free range eggs

An authentic Spanish Tortilla recipe is made only from eggs and potatoes, but if you are wanting to make something that is a meal in itself, it is good to add a few other vegetables, and really these can be what you have in your cupboard or fridge. Peas, chopped peppers, onions and french beans are all good!

If you wish to make an authentic Spanish Tortilla, then just use the potato and egg and miss out the other ingredients.

, big enough to take the potatoes and egg. If you only have a smaller frying pan you may need to halve the quantities and just make a recipe for two.

Spanish Omelette – For Supper or Lunch

The Spanish omelette can be eaten hot or cold. In Spain, tortilla is often served cold as a snack or in a picnic. It can also be chopped into small pieces and serves as part of a tapas meal. So if you have any leftovers, consider taking it in your lunch box next day.