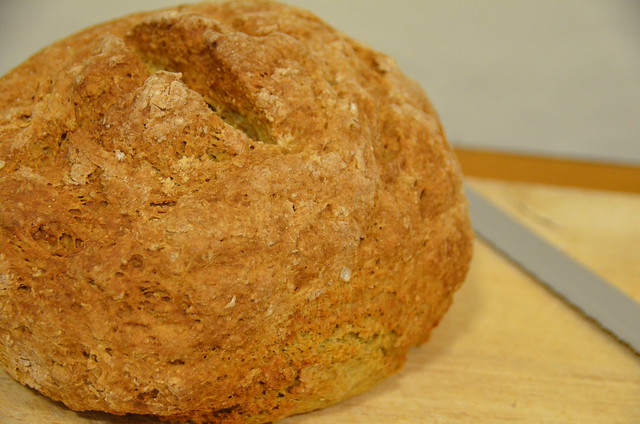 Soda Bread Made With White And Wholemeal Flour

I had never baked soda bread until Rosie gave me this recipe from an old recipe book by Theodora Fitzgibbon on traditional Irish food.

Rosie likes to bake all her own bread and doesn’t like it if she runs out and has to buy some from a shop. Soda bread is much faster to make than yeast bread and certainly makes a change too – so it’s good to add to my bread-making repertoire

Soda bread gives you a quick to make alternative to yeast bread, as well as being a robust, tasty and excellent bread in its own right

Soda bread became popular in Ireland in the mid 1800s. It uses bicarbonate of soda as a raising agent instead of yeast and uses ordinary baking flour rather than strong bread flour. Because it does not use yeast, soda bread is much quicker to make since there is no ‘proving’ time as with yeast bread. Soda bread also traditionally uses buttermilk – conveniently a by-product of butter making (hence the name). There is therefore no butter in buttermilk and it is very low in fat. Nowadays though, the butter milk bought from the supermarkets is cultured.

Soda bread can be made from white bread – or a mix of white bread and wholemeal as the one in the picture. Which one to go for depends on your taste and your store cupboard. It is a very robust bread and goes very well with soups and stews.

Many people add seeds, currants or other dried fruit to give the bread more interest or sweetness. Treacle can be added as the variation recipe below. As ever, try out your own ideas. I think my bread is more of a loaf than it should be. It should probably be flatter and rounder. If you are an expert on these matters, please feel free to comment.

The traditional cross in the middle of soda bread, is said to be there to ward off evil.

However it is still a good idea to help the heat distribute evenly during the cooking process. What ever the reason – if you want to keep things traditional – go ahead and make that cross with a good, sharp knife!

Rosie also tells me that traditionally the heat for cooking came from above and below in a bastable oven. It is a bit like a cauldron with a lid and three legs. In fact sometimes Irish soda bread is referred to as bastable cake! But don’t worry, it can easily be baked in fan oven. 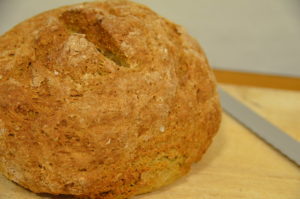 To ring the changes, try this alternative:–