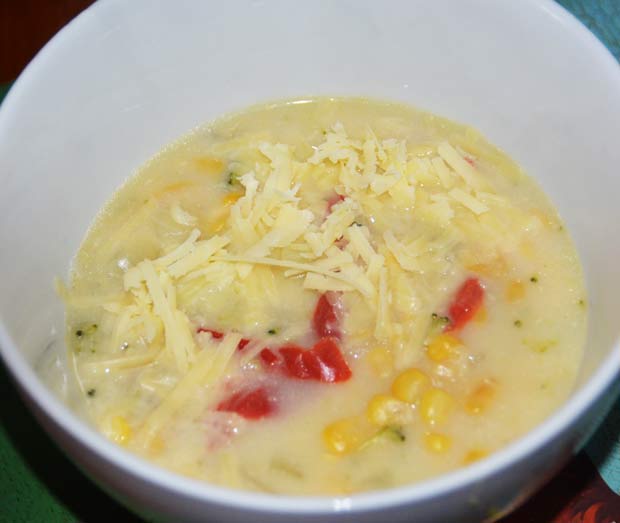 A chowder is simply a thick soup made with chunky vegetables and potatoes. Often made with fish, generally a soup is called a chowder when it is a bit more substantial than a soup so can be a meal in itself.

This vegetable chowder is a delicious combination of vegetables with the addition of cheese. It easily makes a light supper or a substantial lunchtime meal.

The original meaning of the word chowder is unknown although it may refer to a latin term for cooking pot.

A substantial, warming soup at lunchtime can set you up for the afternoon. This vegetable chowder can also be a light supper

This vegetables soup does require a bit of peeling and chopping at the outset, but then the work is done and it just needs to simmer on the hob for 20 minutes. The effort is well worth it for this delicious and substantial soup. It is a ‘chunky’ soup so doesn’t require a blender or liquidiser. Great for a light supper or lunch.

The soup uses red peppers, broccoli and potato along with canned sweetcorn, which does add sweetness to the dish. You can ring the changes with the vegetables using cauliflower, frozen peas or green beans. Just use the vegetables you have as it is a great way to use up bits and bobs of vegetable that you have in the fridge.

Although substantial enough to be served with out bread, a good granary roll or white bap would be a great accompaniment. Also benefits for a sprinkling of freshly ground pepper

It is an ideal meal to take to work in a Thermos flask, making a welcoming change from a sandwich for lunch at the office or on the move.