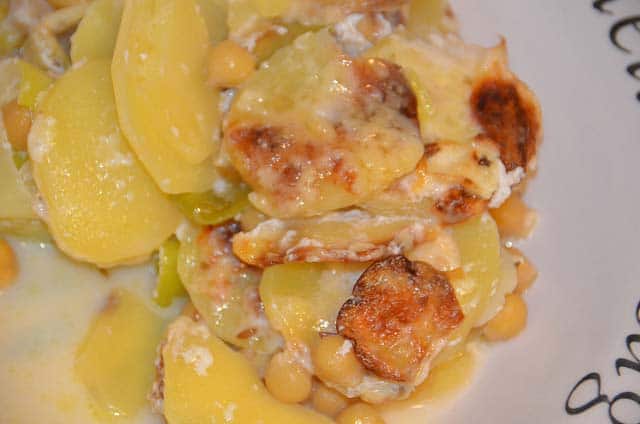 Leek And Potato – Made For Each Other

I love leek and potato – whether in Leek and Potato soup or Leek and Potato Gratin. They are two vegetables that just go together. My recipe for leek and potato gratin has ham in it but I wanted to make a vegetarian version that would be a bit more substantial. And I had the idea of adding chickpeas – and some cumin seeds to flavour.

Tasty, nutritious and low cost recipe for a family midweek meal that is quick and easy to prepare

The result is a really good, wholesome and low cost recipe for a mid week supper – the cost is around £2.50 for four people and it takes just minutes to prepare and the 45 minutes in the oven leaving the cook free to do other things. I served this with sweetcorn, but you could serve with any vegetable of your choice.

In these days of austerity, it can seem hard to manage with rising prices and static incomes so having a few really low cost supper ideas that are not only frugal but delicious can be a real help. Chickpeas are tasty and nutritious and around 70p a can.

Alternatively you can buy a bag of dried peas and soak them overnight, boil till soft the next day (about 2 hours) and freeze in portion sizes ready for use.

You can adapt this recipe to serve as many people as you need.

The chickpea (or garbanzo bean as it is known in the US) is an ancient food of the Mediterranean and is now associated both with Moroccan and Indian cuisine. It is a tasty legume used widely in salads, curries, stews and of course, hummus. 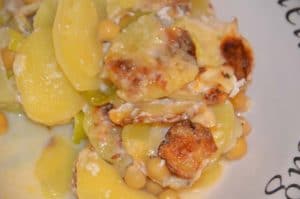