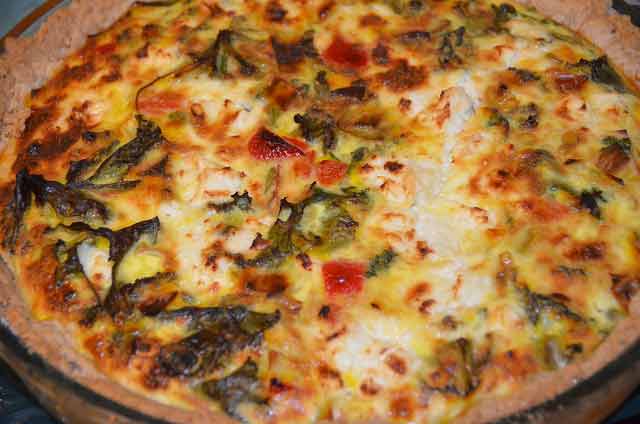 Kale has along season through the winter months. Although not widely available in supermarkets, it is often a staple of vegetable box schemes such as Riverford and found in abundance at Farmers markets. Recently hailed as a superfood it is full of flavonoids and is said to lower cholesterol and protect against cancer.

This Kale and Feta Cheese Flan recipe is a tasty and easy way to make the most of curly kale. Made with oatmeal and spelt pastry

It can be eaten raw in salad or as a side vegetable, boiled or steamed but it is at its best, in my opinion when combine with other ingredients to add some green colour and flavour to many dishes.

As humans we have been eating kale for thousands of years. I suspect people ate more kale 50 years ago when more people grew their own vegetables. It was certainly much more popular in the Middle Ages

There are several types of kale – with curly kale probably being the most popular. There is also Hungry Gap Kale, Red Russian Kale and Black Kale (or cavalo nero)

Feta cheese is a traditional Greek cheese original made with sheep’s milk but much commercially produced feta cheese os cows milk. It is relatively high in sodium and saturated fat so it its best eaten with plenty of vegetables and in moderation.

It is superb for flavouring tarts and pasta dishes in combination with other vegetables.

I decided to make oatmeal pastry for this dish to give the pastry more crunch and crumble. The oatmeal is combined with spelt flour to make a low gluten, wheat free pastry. You can of course make ordinary wheat flour pastry if you prefer – see How To Make Pastry

Oatmeal has a lot of health benefits and I think it could be good to find ways to eat more of it. Oats and oatmela can often be used in place of flour. It also gives a more nutty flavour and robust texture. I think it goes with this flan really well. 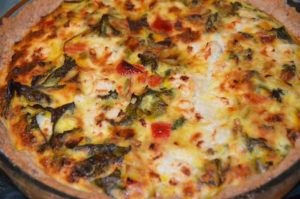