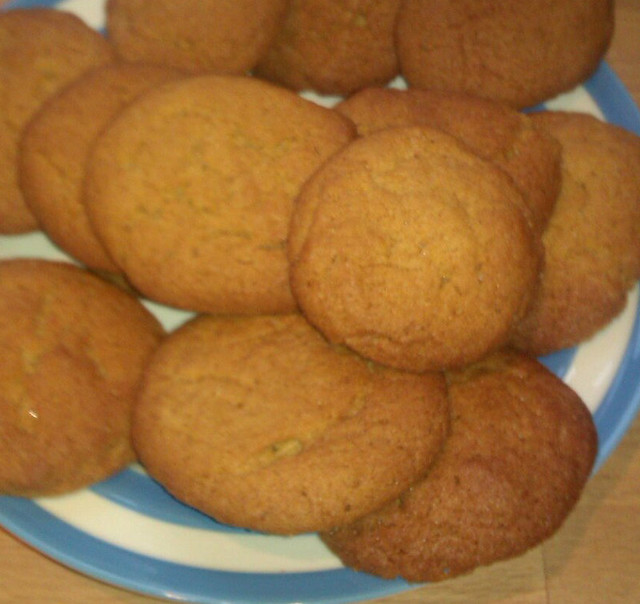 Having baked Ginger Cookies several times now, I am getting suggestions of other ginger recipes. I think ginger is so comforting and warming – and good for you!

Ginger biscuits are easy to make and lovely with a cup of tea! Fun for children to make too!

This recipe comes from the collection of recipes put together to raise money for Exeter Steiner School. It was contributed by Arabella (who has also given me recipes for Sweetcorn fritters and Slow Cooker Soup.)

On seeing my Ginger Cookie recipe she was reminded of her ginger biscuit recipe and went off to make some. The picture of her recent batch is above.

The recipe has a little story:-

When I was a little girl, we lived in a small village for a while and my parents became close to a much older couple. Mr and Mrs Horne lived in a lovely thatched cottage that needed a room repainting. In exchange for painting the kitchen, my Mother was given a family recipe for ginger biscuits. This was one of the first recipes I learnt as a child and know my daughter loves to make them too

There is something very therapeutic about exchanging skills or goods in kind instead of money. And food is such a lovely way to be ‘paid’ for a job. Many people do of course informally swap what they have. A friend of mine recently made marmalade and I exchanged a jar in return for one of my jars of chilli jam! 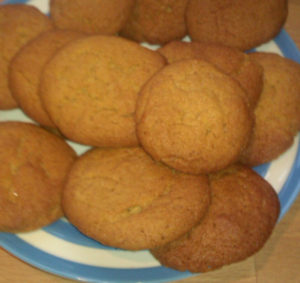