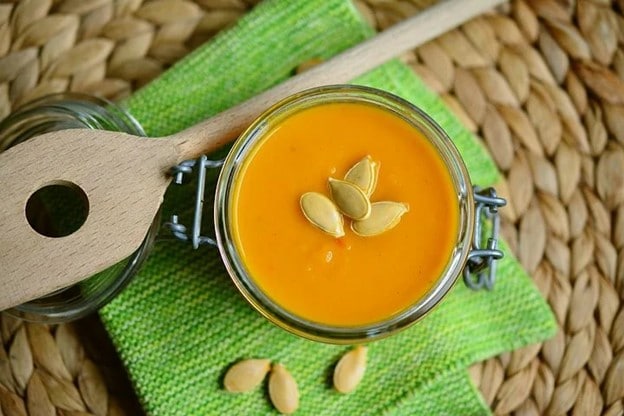 Halloween is miles away, but pumpkins are still in the shops and seems to be quite trendy even! Pumpkins are best known at Halloween for carving or for Pumpkin Pie on Thanksgiving and can get largely ignored apart from these days. But there are many other ways to use a pumpkin!

Many coffee shops are now offering the Pumpkin Spiced Latte which is a delightfully warm and comforting drink for this time of year alongside the ever-popular Gingerbread Latte.

However, it is the Pumpkin Spiced Latte that everyone is talking about. In fact, Datassential, the MenuTrends database, has already predicted that this year will be one of the most active in regards to seasonal pumpkin appearing on menus.

Pumpkin As A Vegetable

Pumpkin is a classic allotment vegetable and many a village fete has had competitions for the biggest pumpkin! Most people don’t eat pumpkin on its own. But as an ingredient in many recipes it is delicious and can be used in many different ways from soup to risotto and can be used as a main ingredient for your supper. It can be used in all recipes too instead of Butternut Squash

Roasted Pumpkin Soup and Pumpkin Risotto are just a couple of examples.

There are very many more pumpkin recipes on this website.

Perhaps surprisingly, a lot of people are also using pumpkin in cocktails. Pumpkin adds sweetness and colour to your cocktails

So, what can you expect when you make this cocktail? Aside from pumpkin, the other ingredients used are tequila, cinnamon, carrot juice, and oregano. This works together to create a unique and tasty blend, and cinnamon to bring a bit of winter flavour to the drink.

Pumpkin As a Dessert

Aside from making fancy drinks with pumpkin, pumpkins are used for the popular desserts that can be created with it. Pumpkin pie has long been a popular choice across America, and people have their own way to making this dessert. However, you can add your own little twist on it, adding different flavours and other ingredients to make your pumpkin pie different to the norm.

So who knew that pumpkins could be so versatile? From drinks to soup to dessert the humble pumpkin is so much more than a Halloween craft project!