I am often surprised at the price of pizzas in the supermarkets and the takeaways ones. A pizza is simply a dough base, similar to bread with a variety of toppings on the top. The cheap pizzas often have rather meagre toppings on them, so you may be tempted to add more and the luxury pizzas are just way too expensive.

If you love pizza but don’t like the prices, make your own. It really is easy and you can choose exactly what toppings you like. A luzury pizza for a fraction of a takeaway price!

Pizza base is very easy to make and low cost. You can make as much dough as you need according to how many people you wish to feed. The base costs under 50p for four people so the rest of the cost is in the topping.

A cheese and tomato pizza with some herbs is about £2 for four people. In this pizza I added some goats cheese and chopped pepper. For this type of recipe the frozen sliced mixed peppers you can buy from the supermarkets are good value and you can just use the amount you want

You can buy pizza bases if you don’t want to make your own. Just add your own toppings. Some supermarkets sell a pizza base mix too – but it is just flour, yeast and salt mixed together – and much more expensive than making your own mix as it only makes one base.

You can have fun trying different toppings including ham, pineapple or adding some chillies and pepperoni

Serve with some coleslaw and / or salad

The recipe makes four generous pizzas. You could make two and serve half to everyone with a small baked potato and perhaps some sweetcorn.

You can always try pizza tossing too if you like! 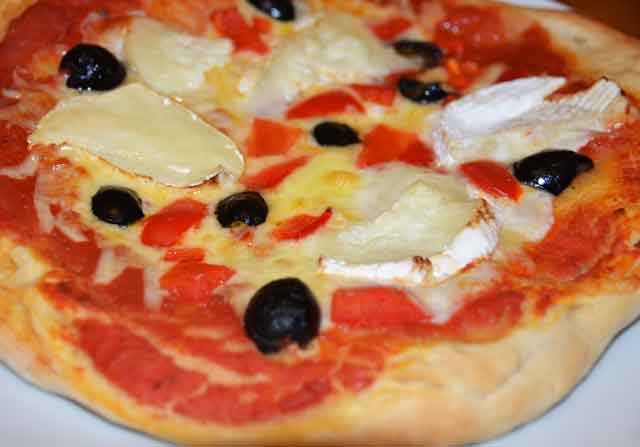