This easy, low cost pineapple pudding recipe came from a Yorkshire WI recipe book printed in 1931! I was so excited to find the book as it has 600 recipes in it and most have no more than 6 ingredients and not very many instructions. The women who used these books had busy lives – perhaps differently busy from the ones we lead today. I certainly think we can learn something from them in our quest for easy to cook recipes with cheap ingredients but tasty too!

A delightful pineapple dessert recipe from a 1930s WI cookbook! They knew a thing or two about low cost, easy recipes back then

For my first recipe to make from the book I chose this Pineapple dessert. My choice was partly because I had a tin of pineapple in the cupboard. But also I had not come across a pineapple pudding quite like it before. Many puddings we have now are considered ‘traditional’ such as Treacle Pudding, Rice Pudding and Apple Crumble but I am sure some lovely pudding recipes may have got lost in the ether of time – and may be this is one of them.

Several of the recipes in the book are not quite as specific as recipes are today. Maybe people had more knowledge such as how to feel how hot the oven was by putting a hand in it. Or may be because people adapted the recipe according to what they had in the cupboard, in times when ingredients may have been less available.

For example the original recipe for this pineapple pudding says 2oz or 3oz of butter without any explanation of why. Probably it simply means really that although 3ozs are best 2ozs is fine if that is all you can spare. The recipe also suggests a pint of pineapple juice and milk together without specifying the relative quantities. I have interpreted the recipe and recorded how I see the final recipe as I made it. 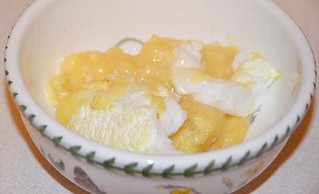 Although we are not used to this way of presenting recipes, it is helpful in a way in that it indicates which ingredients can be more imprecise in their quantities.

These days I think people can be be put off from doing a recipe if they do not have the exact ingredients. Whereas in many cases a recipe can be used as a starting point or as an idea and adapted to what you have in your cupboards or indeed to your own tastes.

Simple Ingredients For a Tasty Pudding

This is the sort of pudding that can be made at short notice as it is made from store cupboard items (if you generally buy tinned pineapple) since it is made from eggs, flour, milk and sugar plus the pineapple. Many of the recipes in the cookery book are like that as I think our Grandmothers knew how to make delightful meals – both savoury and sweet, from basic ingredients 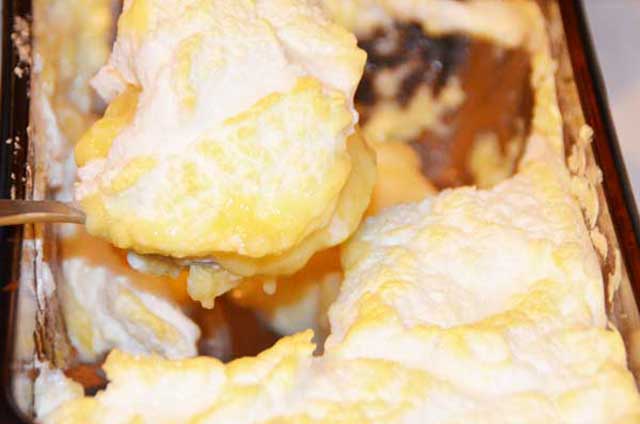