Peppers surely were made for stuffing! You can stuff peppers with a variety of mixtures. Feel free to change the ingredients in this recipe with may be carrots, olives, sun dried tomatoes – anything that will go with a savoury mince type recipe

When stuffed peppers have been cooked in the oven, the flesh of the pepper goes sweet and soft and is absolutely delicious! And there are different colours to choose from! The red pepper is sweeter than the green pepper, and the yellow pepper is somewhere in-between. So choose which you like or try them all.

Peppers are available in the supermarket all year round but are in season in the summer and autumn months.They are now grown in the UK in glasshouses from March to November.

If you can get some local organic peppers, do try them, as they are often the best for flavour.

You can stuff peppers with just about anything. Peppers are great stuffed with rice or couscous but this recipe for mince stuffed peppers is a favourite. You can vary the flavourings and add vegetables or nuts to the mix. Use the recipe as a basis to implement your own ideas and flavours.

Serve with a leafy salad or your favourite cooked vegetable.

You will need a large frying pan, a cheese grater and a baking tray 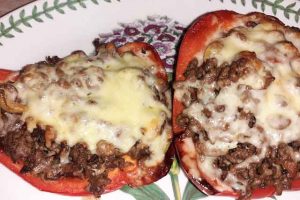